Someone recounted a line from a film to me recently: “It’s French to have a mistress, it’s English to be caught.”  I am an Englishman with three French wives and my wife is happy about all of them.
The fact that those wives are all well over a hundred may have something to do with it. In the mid-19th there was a great enthusiasm for rose breeding in France and many of the most popular roses in English gardens today are immigrants from that period.
Of nearly 50 rose varieties in my garden, three are French mesdames – Mme Isaac Pereire, Mme Hardy and Mme Alfred Carriére.
These French roses all offer a strong perfume, but to Mme Pereire is also attached a faint whiff of scandal.
Madame Hardy
Mme Hardy was Marie-Thérése Pezard, the wife (and cousin) of Jules-Alexandre Hardy. He was the Superintendent of the famed Jardin du Luxembourg in Paris for 42 years and a widely-respected expert on trees (the pear, Beurré Hardy is named after him).  He also bred over 200 roses producing this, his most famous, in 1832 – probably the result of crossing a Damask rose with a Centifolia. 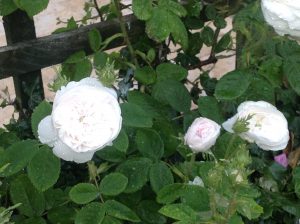 When it first emerges, the modestly-sized bloom has a subtle pink blush. It opens white with a complex quartered ruffle of petals and a lime green eye at the centre. Beautifully scented and – like her name – hardy, this is one of the most ravishing of roses
An American blogger said it as well as anyone: “She blooms only once a year, Madame Hardy, but when she blooms the angels have come to earth and blessed us with a glimpse of heaven.” Don’t ask me to name a favourite rose – it is too cruel – but Mme Hardy has to be in my top six.
Mme Hardy does not form hips or contribute pollen, so her charms cannot be bestowed on other roses, meaning she has remained without peer for nearly 200 years.
Mme Isaac Pereire
Monsieur Jacques Julien Margottin knew a good rose when he saw one. He was a nurseryman from the Paris suburb of Bourg-la-Reine who had worked under our friend Monsieur Hardy for a year.
In 1851 he had introduced the famous Louise Odier and was looking for another horticultural hit when in 1880 he spotted Le Bienheureux de la Salle – Blessed la Salle – a large pink Bourbon bred by a young garden labourer in Rouen called Armand Garçon.
The name La Salle is believed to be a homage to Jean-Baptiste de la Salle, founder of the Christian Brothers. La Salle spent the last years of his life in Rouen and was instrumental in introducing free primary education for the poor there – with lessons in French, rather than Latin, and classes in the evenings and Sundays. Garçon was a beneficiary, and clearly grateful.

Emperor Napoléon III, welcoming the great and good to the 1867 world expo in Paris

This was not the first rose that Garçon had bred. He regularly presented his creations to the Rouen Horticultural Society who exhibited his roses at the World Expo in Paris in 1867. There he received a top prize and newspapers report that the Empress  was so taken with his creations she deigned that one might carry her name. The proud Rouen Horticultural Society rewarded him with 300 francs for his success in promoting Normandy.
Garçon did not have the resources to grow and market his roses commercially, so tended to sell the rights to more established breeders and nurserymen.
When Margottin saw Le Bienheureux de la Salle he knew it was a winner and enlisted the support of one of his customers to buy it. Mme Fanny Pereire was the recently widowed wife of the fabulously rich Parisian financier, Isaac Pereire. On buying the rights to Garçon’s rose, Margottin changed its name to honour her. 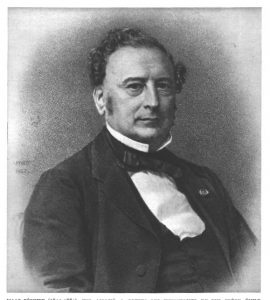 In 1882 he showed it in London as a fresh creation of his own, under its new name, winning a prize. The Rouen Central Horticultural Society were furious and wrote in protest pointing out that it was the custom to honour the original breeder and Margottin was falsely taking the credit. Garçon’s name was restored as breeder, but the name of the rose remained unchanged. It still carries Mme Pereire’s name today.

Now one of the most famous French roses, this classic is a new introduction to my garden, and she is in a bit of a shady spot, so I am not sure yet how she is going to settle.
Mme Alfred Carriére
Mme Alfred Carriére was bred in France in 1879 by Joseph Schwartz. He dedicated it to the wife of keen amateur rosarian and journalist Alfred Carriére, the chief editor of a popular 19th century French gardening journal.
Mme Alfred Carriére is a vigorous climber that is shade tolerant. The white blooms, with just a hint of pink, keep coming all through the Summer and give off a beautiful light scent.
In my garden she has been trained along an eight foot high fence, but when I say “trained” I mean that in the loosest sense. Each Summer she wills her shoots ever higher, adding an extra four foot to the trellis, and each Autumn and Spring I cut them back again.
It is interesting that so many of these Victorian French roses are named after wives. It is a tradition that romantic husbands today can echo by spending £20,000 to have a rose named after a beloved. Word from the wise: the gesture might lose some of its impact if you also copy the Victorian tendency to just put “Mrs” in front of your own name.