A machine for spraying fruit crops. 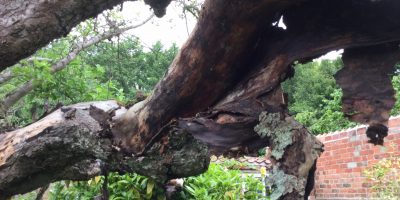 It is perhaps the Victorians who took the war on garden pests to the greatest extremes. 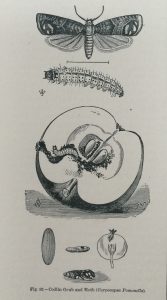 Many of us with apple trees in the garden today will have cursed the codling moth, whose caterpillars worm their way into the centre of the fruit, causing it to ripen and drop early. In past years every single apple on our ancient tree has been blighted with this blasted creature. Eat the apple at your peril. You risk getting a mouthful of caterpillar (rare) or, more likely, its excrement pellets.

One of the great texts for any professional Victorian gardener was Thompson’s Gardener’s Assistant. So what does it have to say on the issue of the “codlin grub” as it was termed? 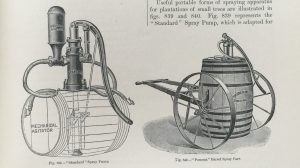 “Paris-green and London-purple are often employed with great success against the Codlin Grub. One pound of either should be well mixed in 200 to 250 gallons of water, thoroughly stirred and then applied to the trees, as soon as the blossoms fall, in the fall of a fine spray, till the leaves and fruits are just moist, but not dripping. The operations may be repeated when the fruit begin to swell.”

Paris green is a highly toxic emerald-green crystalline powder mix of copper acetate and arsenic trioxide that was used to kill rats in Parisian sewers – from whence comes its name. To be fair, the Victorians weren’t stupid and knew it was poisonous. Thompson’s warns that the ingredients should be used with care but reassures us; “they get washed off by rain long before the fruit is ripe”.

He also offers other, less drastic measures. “Collect all fallen and grub-eaten fruit and burn it, or feed pigs with it as soon as it falls. Strips of cloth or sacking may be tied round the trunk of the trees near the base and the caterpillars will lay up for the winter underneath the bands. Commence in July and continue for a week after the fruit is gathered, examining the bands every ten days or so, and destroying caterpillars or pupae.”

This is still regarded as good practice – see this video from the Utah State University. The video starts with a recipe for making codling moth traps, using a mix of molasses, water and yeast to hang in jugs from the branches in late Spring.

I haven’t tried this (yet) but I did use a pheromone trap, which made some difference. This is a small plastic tent-like structure that hangs in the tree. On the floor of the trap is placed a sticky paper with a plug in the middle emitting a scent similar to that given off by the virgin female codling moth. This lures the males to their death, leaving the female alone, pumping out pheromones and wondering what’s wrong with her. The result is that fewer fertile eggs are laid and less fruit contaminated.

Have the Victorians any other useful tips for controlling garden pests? Thompson’s, successor as editor of the  Gardener’s Assistant, William Watson, writing in 1900, offers an organic (though not vegetarian) cure for ants – “Bones with a small quantity of boiled meat upon them will attract ants in large numbers, when the bones now and again may be dipped in boiling water to kill the vermin.”

In December, it suggests “a rough trenching should be made in the kitchen garden and the soil left in ridges to the action of the frost. this will afterwards render the soil pliable, besides ridding you of many garden pests, in the way of slugs, &c.”

In April: “The roses will require a careful examination, for you will find secreted among the leaves and the now rapidly swelling buds, the mischievous grub that so disfigures it if does not entirely destroy many a handsome rose. The best, indeed, the only good, remedy is a thorough syringing with a pail of water in which you have dissolved some soft soap with a mere suspicion of turpentine in it. This first syringing should be immediately followed by a syringing with entirely fresh water.”

In May: “It is generally about this time that we begin to grow anxious as to whether or not we are to have a visitation of the gooseberry caterpillar. One remedy against this unhappy pest… is as follows:– Spread some tar on some good coarse paper, and place it all round on the ground underneath the tree affected. Then give a gentle steady, but very decided, shake to the tree: numbers of caterpillars at once, of course, fall on to the tar, and are soon speedily dead. This is certainly a quicker method then picking them off by hand and is decidedly effectual, as they cannot crawl away.”

The biggest pests I have in my garden are slugs, greenfly and sawfly. Beer traps have worked for the slugs (though it’s an expensive solution because they don’t seem to like cheap beer! Let me know if you find a cheap one they do like please).

I’ve found spraying off the worst of the greenfly with a mix of water, vegetable oil and a dash of Ecover washing up liquid seems to do the trick  (particularly on the Zephrine Drouhan rose, which is most susceptible to them in early spring).

I keep my eyes peeled for the sawfly and pull off any leaves with lots of caterpillars on or flick them off (a very satisfying game as it seems they can’t climb back up again when they’re on the ground – so no need for tar and paper to catch them).

In essence, I’m doing pretty much what gardeners have been recommended to do for over 100 years – apart from spraying my apples with arsenic!