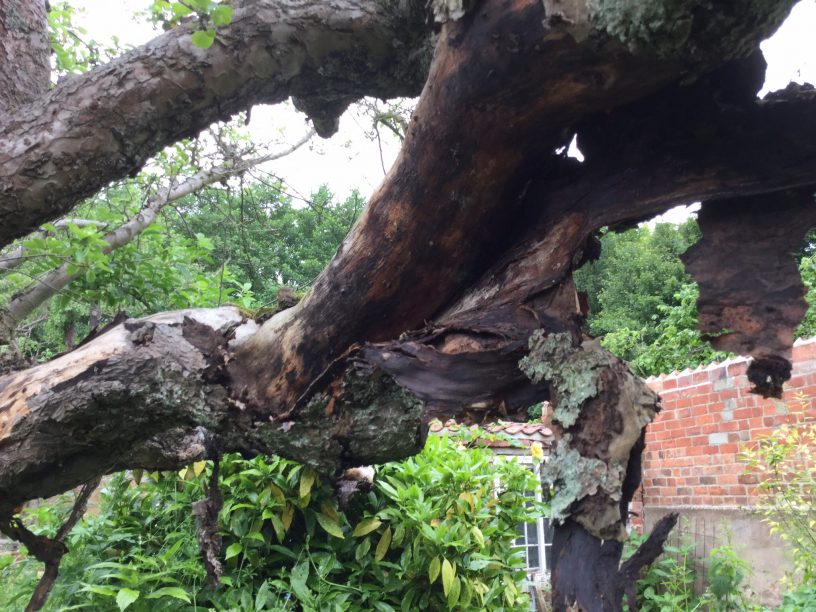 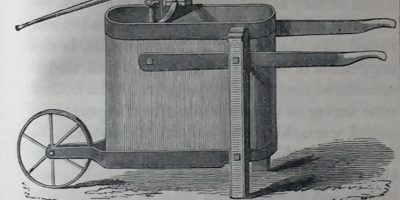 UPDATED 23rd June: Many consider it one of the most important trees in Britain but the original Bramley apple stands forlorn, bark peeling from its gnarled branches, the garden around it overgrown and wild. A plaque from the Tree Council at its foot proclaims it to be one of fifty great British trees, but it will soon die.

The Nottinghamshire tree’s history goes back over 200 years. Like children, apple seedlings rarely grow to display exactly the same characteristics as their parents. This welcome fact helps explain why we have so many varieties of the fruit today. 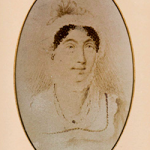 Some time around 1809, Mary Brailsford (1791-1852) planted some apple pips in the garden of her parents’ tiny little terraced cottage in Church St, Southwell.

One of the seedlings grew to yield beautiful, large apples, with a sharp-flavoured flesh that melted to a perfect, sweet mush when cooked. 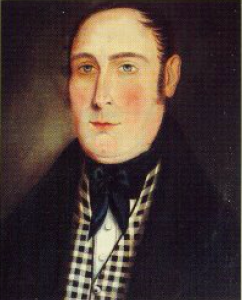 In 1856 Henry Merryweather, the 17-year-old son of a local nurseryman, who had begun working in orchards at the age of ten and was already a fruit expert, encountered George Musson, gardener to the Vicar Choral of Southwell Minster, carrying a basket of fine apples.

Impressed by their size, he asked where they had come from and was told from nearby Tatham’s Orchard – the produce of trees  top-grafted several years earlier from a fine tree in Church St.

By then the cottage was owned by  local butcher Matthew Bramley. In 1924, then a sprightly 86-year-old, Merryweather recalled what happened next*:

“I at once went to see Mr Bramley and his apple tree, which was full of beautiful fruit. I was a young man at the time but knew most of the apples of any consequence and on seeing this tree I was at once struck with the marvellous appearance of this wonderful variety and asked for its name. He said: ‘It is my apple raised in my garden and it is called Bramley’s Seedling.’ I asked for some grafts and was told to take what I wanted. From that time I worked all the plants I had room for and by degrees I had a fine stock of young plants. I then began to have fruiting trees in the Nursery, which more than ever confirmed my opinion of its great value and I considered it the finest apple I had seen”

The Merryweathers recorded the first sale of the fruit in October 1862 – “Three Bramleys apples for 2/- to Mr Geo Cooper of Upton Hall.”  Only three years later they sold two of the trees to the well-known Victorian garden writer, Rev Reynolds Hole,  at nearby Caunton.

The Merryweathers went on to show the fruit widely at competitions, winning awards and its popularity spread, particularly among commercial growers.

By 1924, 80% of Kent’s 2,469 acres of orchards were devoted to Bramley’s Seedlings. The 1944 fruit census shows that more than two million Bramley’s Seedling trees were in commercial plantations in England and Wales. Today 95% of the apples sold in the UK for cooking at home are Bramleys – around 80,000 tonnes are grown here every year.

The original Bramley apple tree was hit by lightning and fell over in the early 1900s, but re-rooted itself and sent up a new trunk. Over 90 years later biologists from the University of Nottingham found it under attack from honey fungus and, concerned about its state, used groundbreaking biotechnology methods to clone the tree. The man leading that project was Professor Ted Cocking. 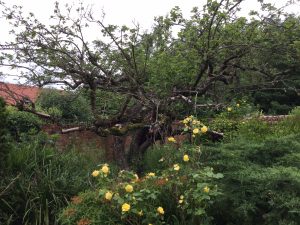 Today a number of the cloned Bramley apple trees are thriving in the Millennium Garden on University Park. Meanwhile, back in Southwell, the cottage at 75 Church Street lies empty. Professor Cocking tells me: “The lady who lived in the cottage and owned the tree was Nancy Harrison. She died about 18 months ago at the age of 94. She was passionate about the tree and kept it going.”

Nancy Harrison left the cottage and its adjacent cottage to her nephew, Coulson Howard, 55, who has lived with and around the tree most of his life. 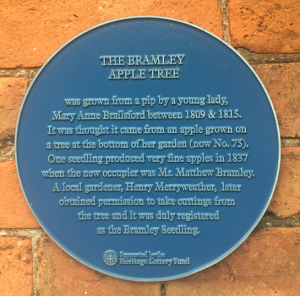 Heritage plaque outside the house on Church Street, Southwell.

Nancy bought both cottages at auction in the 60s and lived at number 76. She let Coulson’s mother live in 75 when the family returned to the UK from Northern Rhodesia.  He was six at the time.

Coulson has a big garden of his own to tend and the struggle of maintaining the Bramley Cottage garden is a hard one. “I’ve looked after the garden for years while Nance was alive but it’s difficult to motivate yourself when the tree has dead branches and hardly any leaves on now. ”

It’s hard to know what to suggest. It would be nice if the cottages and gardens were bought and turned into a small community museum. Alternatively, the National Trust could take it on (sending visitors on from the fantastic workhouse they have in Southwell to see what I suspect were once humble framework knitters’ cottages). At the very least it would be good to see the garden tended with the help of volunteers or professional gardeners – and visitors encouraged to pay their last respects. Think of it as letting the tree die in dignity! 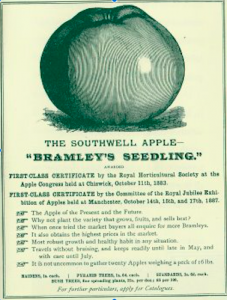 An advert for the Bramley apple from an early Merryweather catalogue

Professor Cocking shares my concern: “The tree is suffering from an untreatable fungal infection. We’re very much now at a terminal stage. It’s been going for 200 years. It’s been struggling for the last ten years. Having seen it, with the bark peeling off, the signs are that within a year or so it is going to die.  It’s sad really that it has been neglected. It feels like a matter of civic pride. It’s not fitting that Southwell should neglect its heritage in this way when for a few hundred pounds a year the garden could be looked after.” 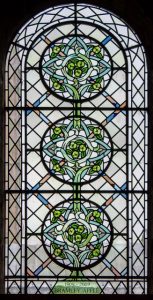 ge the growth of another trunk. An alternative idea is to let it die and create a sculpture from some of its branches – perhas this is the most likely outcome as it might be displayed locally at low cost, for instance in Southwell Minster (near the stained glass Bramley apple window). Another option is to leave it in place when it dies – its dead branches supported or the bigger ones cut off  for safety – and a clone planted next to it.

The plight of the tree, raised by this blog, has generated international media exposure, with coverage and offers of help coming from Japan, Canada and France. The concerns and offers of assistance have encouraged Coulson, who is keen to point out the many people over the years who have helped care for the tree. “I have tried to look after the garden, but I’ve never touched the tree – it’s too precious for an amateur like me. I’ve always had support from people in Southwell and from experts like local fruit farmer Sir John Starkey and Nottingham Trent University’s Brackenhurst campus.”

He was keen to pay particular tribute to Claude Coates, a fruit farmer from Wisbech in Cambridgeshire who came over four times a year for over a decade in the 60s and 70s to spray, prune and tend the tree. “There are lots of people over the years who have played a part in the Bramley apple story but Claude gets no recognition. Soon after Nance bought the cottage at auction he came over to see her and he showed real devotion to the tree.”

So what happens next? 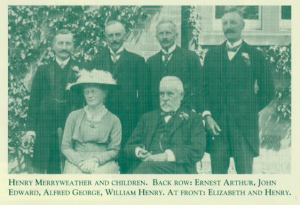 made Bramley famous succumbed itself a few years ago and the land was sold for housing.

Soon, it seems, this famous old tree will disappear too but let’s hope a future emerges for the remains of the tree and the garden that nurtured it. 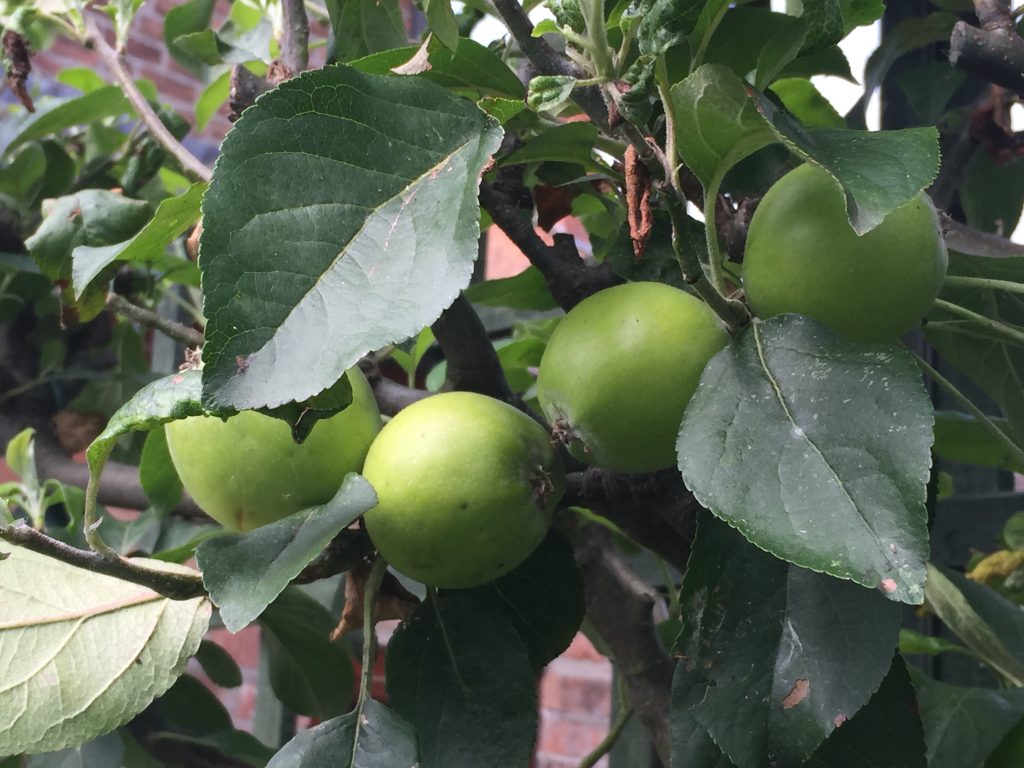 Budding fruit on the Bramley apple tree in my garden, which prompted the research into the tree’s history and visit to see the original.

*I am indebted to Celia Steven, the great granddaughter of Henry Merryweather and her brother Roger, for much of the history.