Back in the early 18th century, the idea of eating celery for pleasure would have been anathema to the English (and still is to some). Legend has it that perceptions were changed by an epicurean French nobleman imprisoned in Nottingham.

In 1704 the Duke of Marlborough had defeated the French at the battle of Blenheim, capturing 13,000 prisoners and the French commander, Marshal Tallard (some say Tallart).

The 53-year old Marshal was brought back to England with around 30  other captured French offers – many of them aristocrats – and their servants. After a few months the decision was taken to move the party out of London, splitting them between Lichfield and Nottingham, where they were to spend the next six years. 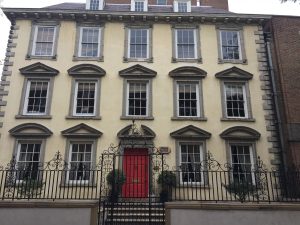 Newdigate House – home of Marshal Tallard during his imprisonment in Nottingham.

This was to be an unusual imprisonment for Tallard, not chained to the dank cave walls underneath Nottingham castle, but renting a room (for 50s a week) in a fine house nearby – Newdigate House on Castlegate. He was seemingly allowed on parole to roam freely in the neighbourhood as he wished.

His arrival in Nottingham caused a stir, with crowds lining Trent Bridge and London Road to stare at the retinue entering the town.

Tallard, who had a distinguished military record and had also served as French Ambassador in London, was clearly a popular and charismatic man who seems to have played on his celebrity, being regularly invited into the great homes of neighbouring gentry (including spending a few days as the guest of the Duke of Devonshire at Chatsworth). 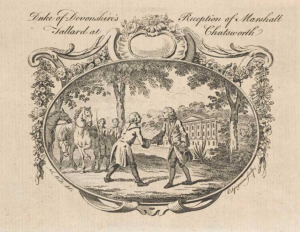 Thomas Coke, MP, privy counsellor and owner of Melbourne Hall in neighbouring Derbyshire, ensured his comfort early on by sending him a small gift. His letter from London, written in French, forewarns him of its arrival:

“I have hazarded sending you fifty bottles of Champagne, and as many of Volne, by the coaches  which  have left here for Nottinghamshire this morning… I shall be very pleased if you find them to your taste.”

The Duke of Newcastle encouraged him to hunt in his nearby park too – crowds would gather outside Newdigate House to watch the cavalcade of horses setting off.

The Marshal plan – the design for Talard’s garden

When not chasing deer or dining, Tallard enjoyed the sloping gardens at Newdigate House. He redesigned them early on in his stay to create a tiered garden, including French-style parterres, with coloured gravels helping to delineate the intricate patterns.* The garden attracted much admiration from locals and visitors who may have paid to see it.

A bi-centenary sketch describing Tallard’s exile in Nottingham, published in the Nottinghamshire Guardian in 1905, sums it up:  “Although nowadays, one would scarcely pitch upon the idea of laying out a small piece of ornamental garden work as a means of attaining notoriety, it is abundantly clear that under Tallard’s master hand that end was attained. In the heyday of its novelty, the marshal’s Magnum Opus doubtless proved an effective magnet alike to peer and high-bred commoner, to say nothing of humbler sight-seers.”

Tallard, who brought his own chef to Nottingham,  is also said to have written a cookbook to show locals how to bake French breads and pastries. But his greatest legacy was the gift of celery.

Celery history – celery grows in marshy land and has been used for centuries as an aphrodisiac and hangover cure.

The story goes that he was riding in the Nottingham suburbs at Lenton one day when he spotted wild celery growing in the marshes. Locals will have been familiar with celery, but are likely to have seen it more as a medicine than a herb or vegetable at the time, “the plant having flourished hitherto only in a wild state about the lanes and ditches.” It was believed from ancient times to be an aphrodisiac and a cure for hangovers (though there is no medical proof that it helps with either). Tallard instantly recognised it and understood what it might contribute to his cuisine.

A member of the parsley family, wild celery had been used in French cooking since at least 1623. In its wild state it has a coarse, earthy taste. The Italians and French first used the stalks in soups and stews, the leaves in salads and its seeds as a spice. By the late 17th century French gardeners had discovered that if the plants were grown in late summer or autumn then kept into winter and blanched by banking soil against them, the stalks lost their acidic quality and assumed the milder, sweetish, aromatic taste we recognise in today’s self-blanching varieties..

Designs for Tallard’s garden show no space for growing vegetables, but we are told the Marshal cultivated celery and the artisans in the suburbs followed his fashion. It does not seem too much to surmise that the man who taught Nottingham bakers to bake French bread, passed on some of his gardening talents to the locals too, to ensure a supply of ingredients for his chef. 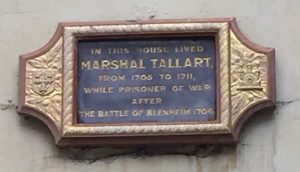 A plaque on Newdigate House today commemorates the Marshal’s stay.

Tallard’s confinement ended in October 1711. He left in some style. The Post Boy  records that “This morning about five, Mareschal Tallard  embark’d in our harbour (Dover) on board a small hoy for Calais, and soon after sail’d as did also another hoy with 22 horses and forty couple of hounds, &c.”

His  garden survived only a couple of decades but our love of celery continues and, if we are to believe Robinson Crusoe author Daniel Defoe, the Marshal may have left another enduring contribution – to the Nottingham gene pool.

In his “Tour through Great Britain” in 1724-5, Defoe writes: “They showed us the Gardens of Count Tallard, who, in his Confinement here, after having been taken Prisoner by the renowned Duke of Marlborough, at the glorious Battle of Blenheim, amused himself with making a small but beautiful Parterre, after the French Taste, which happens not to be the reigning one with us at present. ‘Tis said, likewise, that this gallant Gentleman left behind him here some living Memorandums of his great Affection and Esteem for the English Ladies.”

It seems gardeners and bakers were not the only ones to enjoy the Marshal’s generous company and courtesy.

*The garden is described in some detail in the second volume of George London and Henry Wise’s “The Retir’d Gard’ner”. “The Parterre, consisting of one oblong Quarter of Grass-work, which we call a Fund of Grass, upon which many Varieties of Works are cut out, as Angles of several Forms, Squares, Circles, Semi-circles, Ovals and Branch-works; all which composed together the French call Gazon coupe, and we Cut-works  in Grass.

“These Cut-works are cover’d with Varieties of Colours; for example: a is cover’d with red Sand or Brick-dust; b with the Slug of Pit-coal fine beaten; c  with a yellow Sand; d  with spar that comes from the Lead-Mines, or Cockle-shell beaten very fine; f are Verges of Grass; g Grass at the Corners; h  the Grass-work of the Quarters;  i the Gravel-Walks, which are cover’d with the finest Gravel that can be got, and of various Colours; some are bright, some of a yellowish brown, some greyish, &c., as the Country affords. At the several Centres are Post and Plants.

There are two more parterre tiers – the second tier has similar paths, but sounds less intricate and includes more flowers beds, with “Pyramid-Plants and Pots” as well as a flower border and hedging.

The third tier “which lyes under the other Levels, and consists of Cut-work in Grass, of Pots and Standard Ever-greens at the Centres, a Fountain in the Middle, Gravel Walks round the Quarters with Two Borders at the Side for Flowers.”