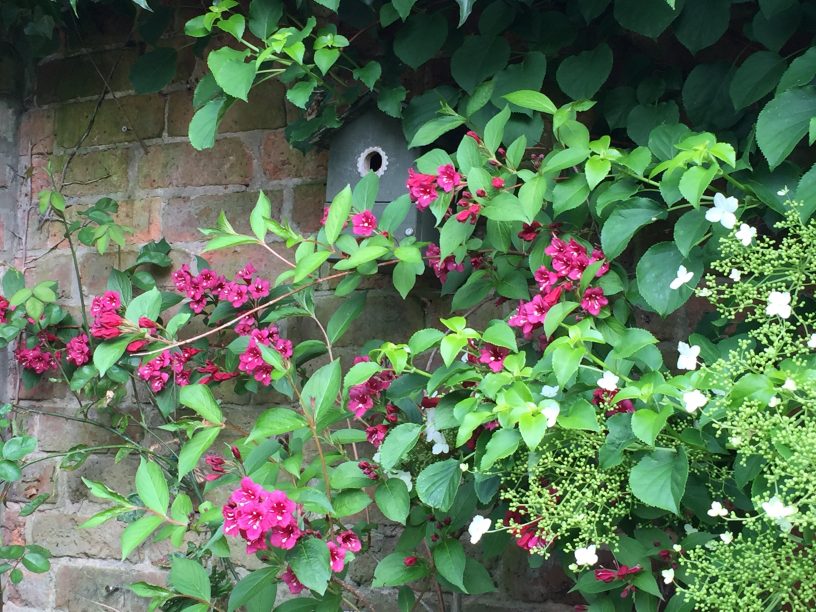 Weigela against a brick wall at the end of my garden 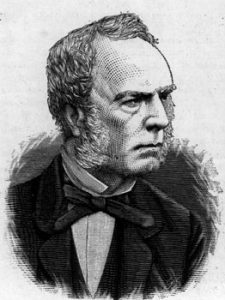 Robert Fortune – it has been estimated that he smuggled 20,000 plants out of China.

Scottish botanist Robert Fortune (1812-1880) was perhaps the most successful of the 19th century plant hunters. In three trips to China between 1843 and 1847 he sent back as many as 200 plants, including weigela.

For centuries China was closed to Western travellers. The Opium Wars resulted in it being forced to open several ports to British merchants. In 1842 Fortune was commissioned by the Horticultural Society (the forerunner of the Royal Horticultural Society) to take advantage of this to go and seek exotic plants to send back to Britain. 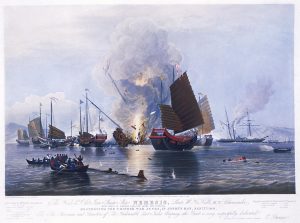 Even given China’s submission to the gunship diplomacy of the British Empire, this was no easy task. As a Westerner he often attracted large crowds (and tells of having his pockets picked). With Imperial hauteur, he described his technique for escape: “I walked on towards the hills and began to ascend them – a plan which I always adopted when I wanted to get away from the Chinese, as they are generally too lazy to follow far, where much exertion is required.” (Some might say the observation equally applies to the British today, as anyone will testify who has fled the crowds swamping Bakewell on a Bank Holiday by the simple expedient of heading out to the hills and away from the pie shops.)

Often Fortune found himself on the wrong end of more than just curious jostling. At one point he was violently robbed, escaping narrowly with his life. On another, a junk he was travelling on came under fire from pirates. He escaped only by threatening to kill his cowering Chinese crew to force them to make good their flight and then shooting dead a number of the pirates as their boats closed in.

Several voyages almost ended in disaster because of incredible storms, and his journeys to the interior had to be done in disguise, with him pretending to be a traditional Chinese man – complete with shaved head and ponytail – as no Westerner was allowed more than a day’s walk from the treaty ports.

His most famous accomplishment was smuggling tea plants out of China to India – and the knowledge of how to process the crop – making possible the Indian tea industry.

Fortune, who also travelled to Japan, was responsible for discovering many plants found in gardens today, including forsythias, lilacs, winter jasmine, skimmia japonica, several varieties of rhododendron, honeysuckle, clematis and paeonies. He also introduced at least half a dozen roses – it will be interesting to see how important they were in the development of our modern varieties. 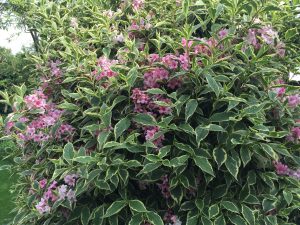 In 1844 he visited the island of Chusan (between the Chinese mainland and Japan), where he came across weigela in the garden of a Chinese mandarin.

He considered it one of the most beautiful shrubs of Northern China. “It was loaded with its noble rose-coloured flowers, and was the admiration of all who saw it, both English and Chinese.”*

More than 170 years later, looking at the two pretty weigela cultivars in my garden – a variegated pink, and a dark crimson – all loaded with flowers, I cannot help feeling admiration too. I have more mixed emotions about Fortune.

Arguably racist, by today’s standards, and a horticultural thief and spy on an industrial scale, his fortune was probably the misfortune of many others. However, by destroying the Chinese tea monopoly he created a huge industry in India and encouraged the English passion for the drink that exists today. Our gardens are immeasurably the richer for his efforts too. Hero or villain? I will hold judgement until I have seen more evidence.