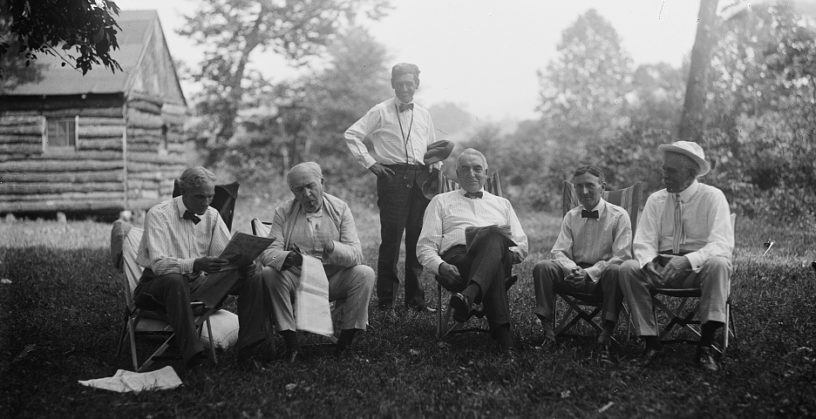 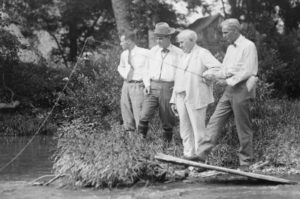 The acclaimed inventor, Thomas Edison, seems an unlikely hero to rose lovers, but his contribution to plant breeding is not inconsequential and the story bizarre enough to warrant telling.

In 1915, Edison (by then 68 years old), along with his great friends, carmaker Henry Ford, tyre manufacturer Harvey Firestone and the naturalist John Burroughs, decided to go on holiday together. 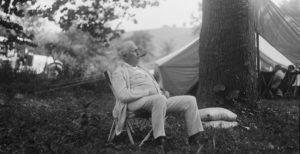 Thomas Edison camping. From the collections of The Henry Ford

They undertook to live under canvas and “cheerfully endure wet, cold, smoke, mosquitoes, black flies and sleepless nights, just to touch naked reality once more.” It was an adventure they were to undertake several times over the course of the next nine years, caravanning through the mountains of Virginia, Tennessee, North Carolina, New England and North Michigan. At one point they visited President Coolidge at his home in Vermont. President Harding joined them in 1921.

The trips were supported by an entourage of trucks. 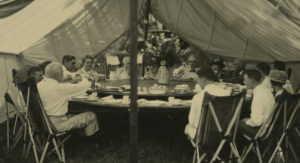 Henry Ford, President Warren Harding and others dining on a Vagabonds trip in 1921 – women in hats, men in bow ties and the biggest Lazy Susan you have ever seen! From the collections of The Henry Ford 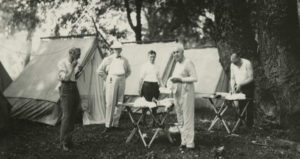 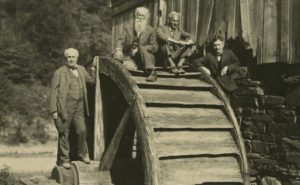 The Vagabonds on a camping trip in 1923. From the collections of The Henry Ford

The “Vagabonds”, as they called themselves, were not exactly slumming it. Newspaper photos show them sitting at a camp table in formal shirts and ties, waited on by a butler. Their entourage on some trips stretched to as many as 50 chauffeured vehicles (all Fords, with Firestone tyres, of course). A media circus (including Ford Motor Company film crews) followed their adventures, which generated newspaper headlines like: “Millions of dollars’ worth of brains off on a vacation” and “Genius to sleep under stars”.

On this first adventure they visited the great Californian American plant

Burbank was famous for having developed more than 800 new plant varieties, including flowers (amaryllis and hybrid lilies), fruit (a white blackberry, developed from more than 65,000 hybrid bushes) and vegetables, including a late blight-resistant potato, the Burbank potato– a response to the Irish potato famine.

Burbank was comfortably well off, largely due to an early inheritance, but none of his discoveries could be patented under contemporary plant patenting law. He complained to friends: “A man can patent a mousetrap or copyright a nasty song, but if he gives to the world a new fruit that will add millions to the value of earth’s annual harvest he will be fortunate if he is rewarded by so much as having his name connected with the result.”

In 1889, rejecting an application to patent a fibre found in pine needles, a US Patent Office commissioner had summed up the general consensus of the time when he declared that if it were allowed: “patents might be obtained upon the trees of the forest and the plants of the earth, which of course would be unreasonable and impossible.”

It meant effectively that the plant originator’s only hope of financial reimbursement was – as Congress was to note later – “through high prices for the comparatively few reproductions that he may dispose of during the first two or three years.” After that, the discovery was likely to be reproduced in unlimited quantity by all. It was the big nurseries that could multiply the stock and sell it rapidly who profited most.

Many plant breeders therefore chose to sell their discoveries to a nursery to start with to make what capital they could. Burbank, for instance, sold the rights to his eponymous potato for $150.

The situation was similar in Europe. In 1880 the Rouen rose breeder Armand Garçon sold the rights to his fuscia pink Bourbon, Le Bienheureux de la Salle,to Jacques Julien Margotin, the nurseryman who thirty years earlier had introduced the world to Louise Odier.

Margotin renamed Garçon’s rose Mme Isaac Pereire, after a wealthy patron – the widow of a Parisian financier. (There was controversy in 1882 when he showed it in London, claiming the credit as breeder of this new discovery. The Rouen Central Horticultural Society wrote in protest and Garçon’s name was reinstated as breeder).

To Edison, who over his lifetime accumulated 2,332 patents worldwide for his inventions and was regularly in the courts defending or litigating patent breaches, this was a nonsensical way to do business. 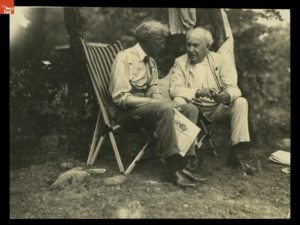 Henry Ford and Thomas Edison, 1921 Camping Trip. From the collections of The Henry Ford

He clearly sympathised with Burbank. Maybe it was while sitting under the stars over the post-prandial whiskeys, that the idea came to them – in 1927 Edison, Ford and Firestone launched a joint business venture. The Edison Botanic Research Corporation was to look for alternative sources of rubber in US plants.

With a legitimate business interest of his own now at stake, Thomas Edison joined those lobbying for a change in the patent law. Givingevidence to Congress in favour of plant patenting, he argued that it would “give us many Burbanks”. Congressman Fiorello La Guardia (of LaGuardia Airport fame), retorted: “Luther Burbank did very well without protection.”

But Edison’s arguments held sway. In May 1930 his efforts were rewarded when Herbert Hoover signed the US Plant Patent Act (as part of the infamous Smoot-Hawley Tariff Act that introduced tariffs on over 20,000 imported goods worsening the economic depression already hitting the country).

The Act gave the holder of the patent exclusive rights for 17 years to propagate a plant by asexual reproduction – “grafting, budding, cutting, layering, division, and the like” – but not by seeds. Tubers were also excluded.

Edison declared: “The new plant-patent bill will be a great boon to agriculture and plant development. I am elated at its passage and believe it will surprise every one by its results in the coming years. Luther Burbank would have been a rich man if he had been protected by such a patent bill. As a rule, the plant breeder is a poor man, with no opportunity for material reward. Now he has a grubstake.”

The restriction to asexual plants meant the legislation did not have quite the impact Edison anticipated, but it did benefit rose breeders. In the 40 years to the end of 1970 only 6,000 plant patents had been granted under the legislation and 60% of these were for roses (compared with three and a half million patents for mechanical, chemical and electrical inventions)[1].

On Monday July 27, 1931, the New York Timesreported that the world’s first plant patent had been awarded – to Henry F Bosenberg and assigned to Louis C Schubert, of the Somerset Rose Nursery, both of New Brunswick, New Jersey. 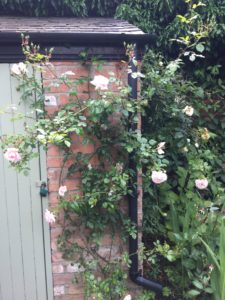 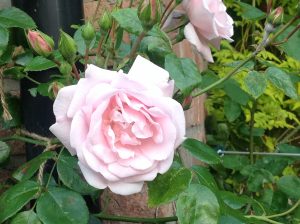 “The patent covers ‘a climbing or trailing rose’, the ‘new dawn,’ and the patentable feature is its ‘everblooming’ character. The rose is described as identical with the Dr Van Fleetclimbing rose, except that instead of blooming once a year it blooms successively after the manner of everblooming tea roses.”

Bosenberg had discovered the rose in 1926 after buying a dozen Dr Van Fleet roses (one of the most commonly grown in America at the time) from his brother, August – part-owner of the Somerset Nursery named on the initial patent claim. He sold 11 and “heeled in” the 12th. He said it was “like Topsy and just grew”.

The paper continues: “The plant bloomed as usual but then continued to give blooms during the entire summer… he decided the rose was a ‘freak’ when it continued to bloom until November. The following year he budded 200 plant with ‘eyes’ from the ‘freak’” and sold them to his brother.

The Indiana Gazette in August 1931 reports how the Department of Agriculture’s Chief of the Bureau of Plant Industry, to whom the application was transmitted, was initially sceptical, seeing no difference between it and the well-known Dr. W. Van Fleet rose, of which it was a sport. Bosenberg had to submit affidavits in support of his repeat flowering assertion. His claim took over a year to process.

Even with a plant patent behind them it was clearly still more profitable to sell the rights on to a large nursery. In October 1931 the Times and Democrat, in Orangeburg, South Carolina, reported that the Henry A Dreer Company, in Philadelphia, had “captured exclusive distribution for this country. Publicity already in ink proves that that astute corporation realizes the advertising possibilities of a long sought variety – and also of US Patent No. 1.”

That same month Thomas Edison died. The New York Times obituarist reported that he had spent his final years at Fort Myers in Florida, where “he experimented with a miniature rubber plantation and tried out several thousand varieties of plants which he thought might produce rubber or textiles or some other valuable product.”

It took more than three decades for Britain to pass similar patenting legislation – the Plant Varieties and Seeds Act of 1964.

Today international plant patent law has been extended beyond asexually reproducing plants and it still prompts controversy. The argument between Edison and La Guardia continues too. Has plant patenting really encouraged innovation?

Over a 70-year career he created more than 230 varieties and built a major family business at his nursery in Albrighton, Shropshire, which today employs about 160 people. 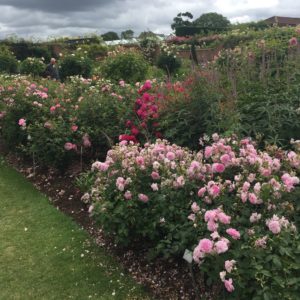 Could he have achieved the same success without patent protection? The head rosarian at the nursery, Michael Marriott, says: “Almost certainly not on the scale that the nursery is today. Breeding new varieties of roses is a hugely expensive business – our annual bill for that is over £1 million – and to finance that without the benefit of protection would be impossible.

“To get the three varieties that we usually introduce at the Chelsea Flower Show we initially do about 150,000 crosses, which produces around 300,000 seeds. From this we get about 150,000 seedlings, of which 10,000 will be selected in the first year of flowering and the rest will be rejected. Over the next eight years the number of selections are gradually reduced until we have just the three left that are then named. Protecting the roses means we can control the nurseries that grow our roses to ensure the quality is kept high and also that we receive an income from the royalties.”

The 1930 plant patenting law may not have created quite the new dawn of innovation that Edison envisaged, but if it has been responsible for the committed breeding programmes of modern commercial rose nurseries it has been a significant benefit to modern rose lovers.