Over the Summer a number of top class rose competitions will take place across Britain. It may be tenuous to suggest they all owe their existence to an event that happened above a small pub in Nottingham over 150 years ago, but it is a good story, so forgive a little exaggeration.

Samuel Reynolds Hole was the vicar of Caunton, a small parish near Newark in Nottinghamshire in the 1850s. One day in early April he received a note from a mechanic in Nottingham, inviting him to assist in judging an Easter Monday rose exhibition by local working men. 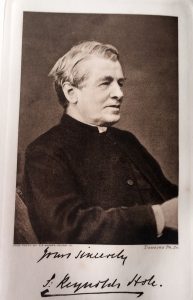 Samuel Reynolds Hole, later Dean of Rochester, pictured in his book of memoirs, 1892.

Though he had a large garden, Hole did not own a single rose and knew little about them. His first assumption was that he was the victim of an April’s Fool hoax. He wrote back somewhat sarcastically asking what roses bloomed in April in Nottingham and no-where else. “By return of post, I was informed, with much more courtesy than I had any claim to, that the Roses in question were grown under glass – where and how, the growers would be delighted to show me, if I would oblige them by my company.”

On a “raw and gusty day” he stepped on to the train to Nottingham, wrapped in a rug and nursing a foot-warmer against the cold. At the station he jumped into a hansom cab and asked to be taken to the General Cathcart Inn – a street corner pub in St Ann’s (one of about 50 demolished during the slum clearances of the 1960s and 1970s) – where he was warmly welcomed by the landlord, who was wearing a glowing red Senateur Vaisse rose pinned to his coat. Others similarly clamoured round to extend greetings. He was told the roses were ready and invited upstairs to judge – while the exhibitors waited downstairs anxiously.

What followed was to be a road to Damascus experience for Hole.

“I mounted and entered one of those long narrow rooms in which market-ordinaries are wont to be held, wherein the Odd-Fellows, the Foresters and the Druids* meet in mysterious conclave, and where during the race-week and the pleasure-fair there is a sound of the viol and the mazy dance. What a contrast now! The chamber, whose normal purpose was clamour and chorus from crowded men, we found empty, hushed and still; the air on other public occasions hot with cooked meats and steaming tumblers, heavy with the smoke and smell of tobacco, was cool and perfumed; and the table – you could not see its homely surface of plain deal … for it was covered from end to end with beautiful and fragrant Roses! … A prettier sight, a more complete surprise of beauty, could not have presented itself on that cold and cloudy morning.” 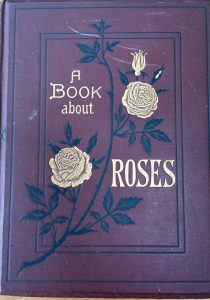 Hole describes his first encounter in “A book about Roses”, first published in 1869. This is an 1877 revised sixth edition.

He recounted how despite many years spent subsequently judging and exhibiting roses, including launching the first National Rose Show, he never saw better specimens of some roses than were exhibited that morning by these workmen, many of them impoverished framework knitters. 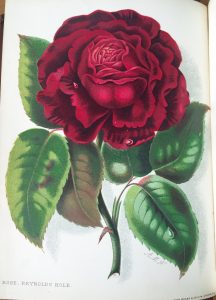 Hole always had a mischievous sense of humour and later became a hugely popular writer. His prose still has the power to amuse today and it is worth looking out for a copy of his Book about Roses.

Even in his state of euphoria he noted wryly that some exhibits did not quite match their illustrious company. “I cannot forget a small and sickly exposition of Paul Ricaut, who, by some happy coincidence, which warmed my whole body with laughter, was appropriately placed in a large medicine-bottle, with a label, requesting that the wretched invalid might be well rubbed every night and morning. Poor Paul! a gentle touch would have sent him to pot-pourri!”

The roses Hole was were grown at the Hungerhill gardens – allotments that go back to 1830 and still exist today. Courtesy of www.picturethepast.co.uk

Afterwards, when the judging was over and the men had rushed to see who had won, several invited him back to their gardens. Many of them had allotments on the edge of town and were growing roses in greenhouses to sell in Manchester and Liverpool. But the rest of the story can wait till another day.

Suffice to say that he was sent home clutching a bouquet. Within a week he had placed his first order of a dozen roses and before long … well, let’s leave it to Hole himself to tell us:

“Year by year my enthusiasm increased. … my Roses multiplied from a dozen to a score, from a score to a hundred from a hundred to a thousand, from one to five thousand trees. They came into my garden a very small band of settlers, and speedily, after the example of other colonists, they civilised all the former inhabitants from off the face of the earth… They routed the rhubarb, they carried the asparagus with resistless force, they cut down the raspberries to a cane. They annexed that vegetable kingdom, and they retain it still.”