When potatoes were illegal

Parmentier – the man who made potatoes legal in France

Introduced from South America by the Spanish in the 16th century, potatoes were considered by the French to cause leprosy. In fact, between 1748 and 1772 it was illegal to grow or eat potatoes in France.

One of the factors behind distrust of the pomme de terre was that it grew underground – in popular culture there was a hierarchy of foods in which the closer to heaven an animal or plant lived the nearer to God it was in the great “chain of being”.

To be fair to the French, the potato is part of the solanaceae family which includes – as well as tomatoes – deadly nightshade. Only its tubers are edible and in the 16th and 17th century potatoes are said to have had much more poisonous solanine content than they do today.

They were also much smaller. The Incas, who were remarkable in their construction of irrigated mountain terrace gardens, are claimed to have always eaten the biggest tubers, leading to progressively smaller potatoes.

So perhaps potatoes were a little unappetising to the sophisticated French palette in the 1700s. But that was all to change.

In 1771, during the Seven Year war with England, a French medical army officer, Antoine-Augustine Parmentier (1737-1813), was captured by the Prussians. He and his fellow prisoners were forced to cultivate and eat potatoes and to their surprise did not catch leprosy. In fact, they rather enjoyed them.

On his return to France, Parmentier campaigned successfully to have the potato law overturned.

As Adam Smith noted in the Wealth of Nations in 1776:

“An acre of potatoes will produce six thousand weight of solid nourishment, three times the quantity produced by the acre of wheat … with less expence …”

Despite its known value as a crop, the potato was still viewed with sceptism and anxiety in France, even after the change in the law. Parmentier, however, was an early PR master. 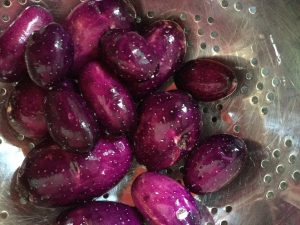 Legend has it the Shetland Black potato was washed ashore from a sunken Armada warship in 1588. Grown in my garden and washed in the colander, they look stunning.

On one occasion he presented a bouquet of potato flowers to Louis XVI and Marie Antoinette. On another, he grew a field of potatoes and surrounded it with armed guards, suggesting they were protecting valuable goods.

He then instructed the guards to accept all bribes from civilians and to withdraw at night so the greedy crowd could “steal” the harvest.

His stunts worked. Within 20 years the French were growing potatoes widely and had invented chips.

It should be noted that the French didn’t have the same reticence in embracing chocolate, another import introduced to Europe from South America. In the 1700s it was traditional to fast before morning Mass. A whole host of foods were proscribed but as chocolate was a relatively new introduction it escaped classification, so even priests began to drink it first thing in the morning, perhaps explaining why still today hot chocolate is a popular breakfast drink in France.

From potatoes to sugar beet

Coming back to Parmentier, he went on to became Inspector General of the Health Service in France, establishing the first mandatory smallpox vaccination campaign (under Napoleon in 1805) and pioneering the extraction of sugar from sugar beet – a campaign which had widespread political and social implications.

In the 18th century the French and British held a monopoly over global sugar supply from their highly profitable cane slave plantations in the West Indies. In 1740 a German chemist, Andreas Sigismund Marggraf, had discovered that crystals formed in beetroot syrup were the same as those in sugar cane but it took more research into extraction and development of the White Silesian beet (which had higher sugar content) for beet as a source of sugar to really take off (today it accounts for two fifths of global supply). 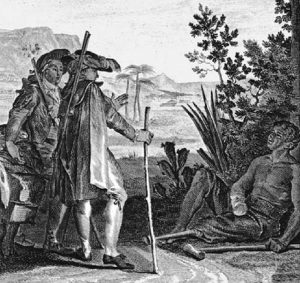 Voltaire’s Candide and Cacambo meeting a maimed slave near Suriname. The caption says, “It is at this price that you eat sugar in Europe”. The slave that utters the remark has had his hand cut off for getting a finger stuck in a millstone and his leg removed for trying to run away.

Indies led to Napoleon supporting Parmentier’s sugar beet campaign and more farmers growing the crop. With sugar now available from beet and cane the long term result was inevitably oversupply. This weakened the position of the slave owners. Protectionist beet producers happily added to their woes by joining the emancipation movement, helping to secure the end of slavery in the French colonies.

And thus, Parmentier can be credited with contributing towards the fall of slavery and the invention of French fries. Not many can boast such a fruitful life – a true horticultural hero.